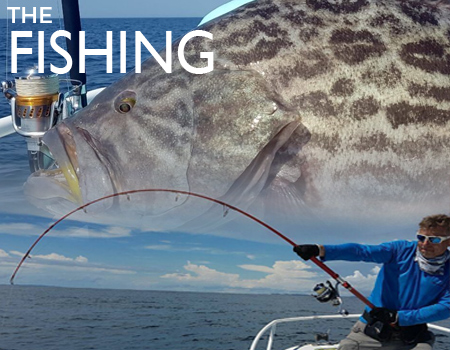 The archipelago of Las Perlas and its surroundings is extraordinarily fishy.
The government of Panama has banned nets longer than 50 m, including for professionals, as well as the use of long liners contributed to this wealth of fish.

Following the American model, sport fishing is recognized in Panama as an economic activity in its own right. However, the country has settled some restrictions. For instance, it is strictly forbidden to kill a rostrum fish and the fishing of marlin and other sailfish is practiced in no kill integral. (see pictures in the gallery).

The most frequent species of fish you may encountered in the area are the following:

5 species of Carangues are very present on site: the Pompano, the Blue Carangue, the Big Eye Carangue, the Permit and the most common the Yellow Carangue (Caranx Caninus) whose size can go up to 15kg and whose power during the fights is unspeakable : this fish does not let go of anything. 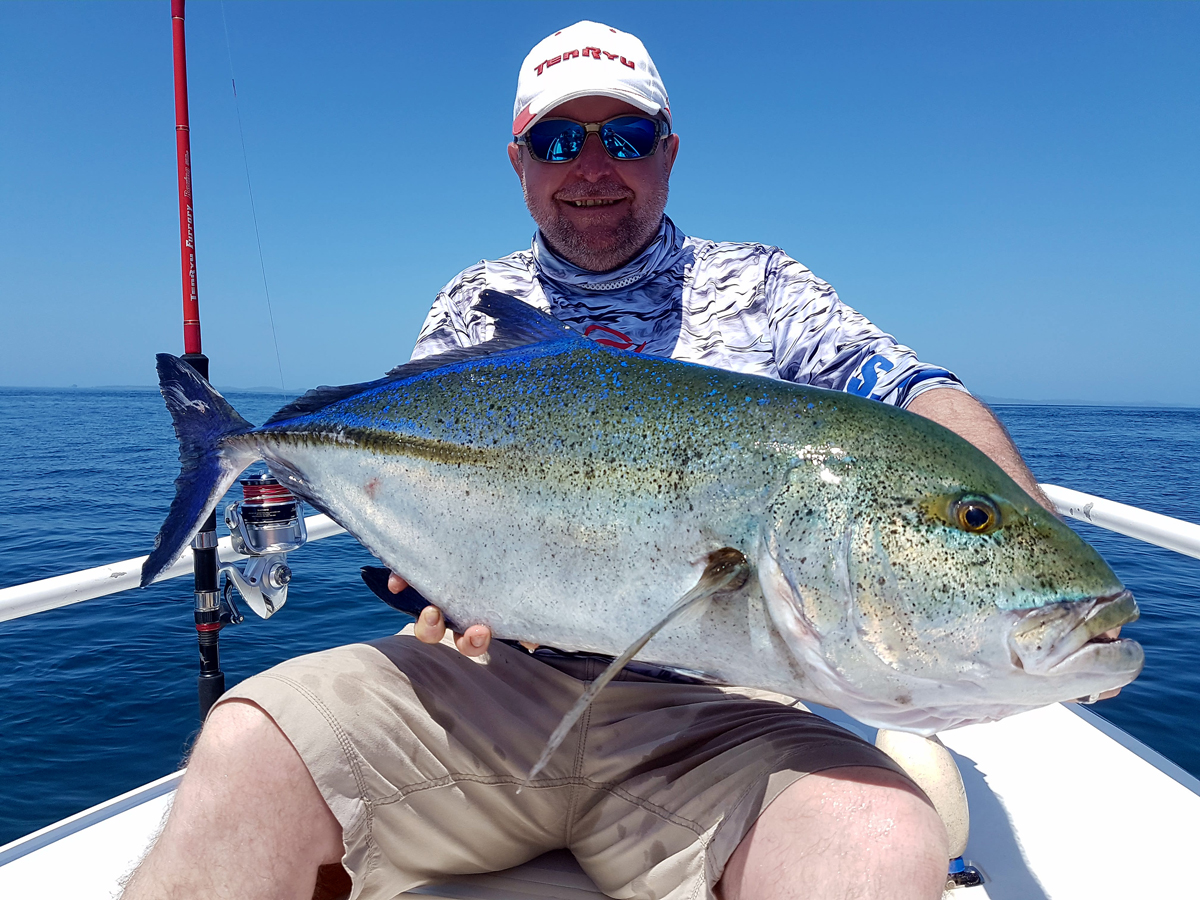 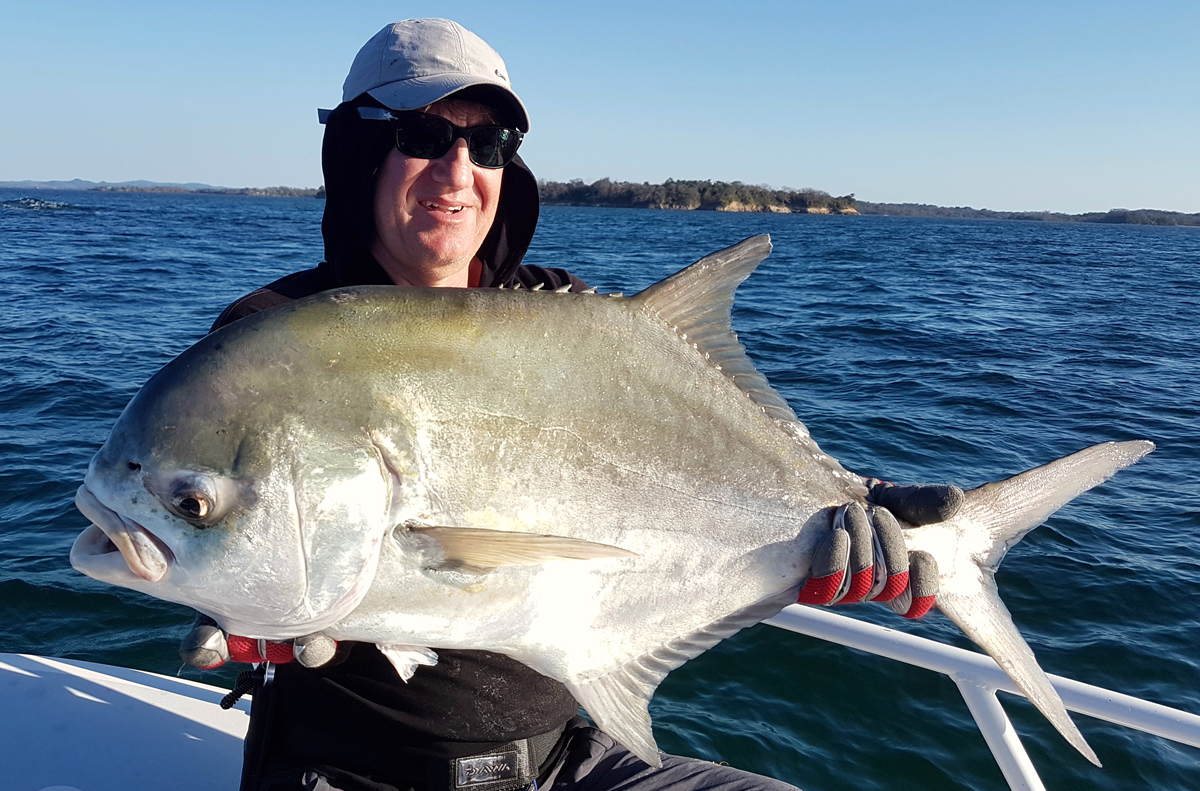 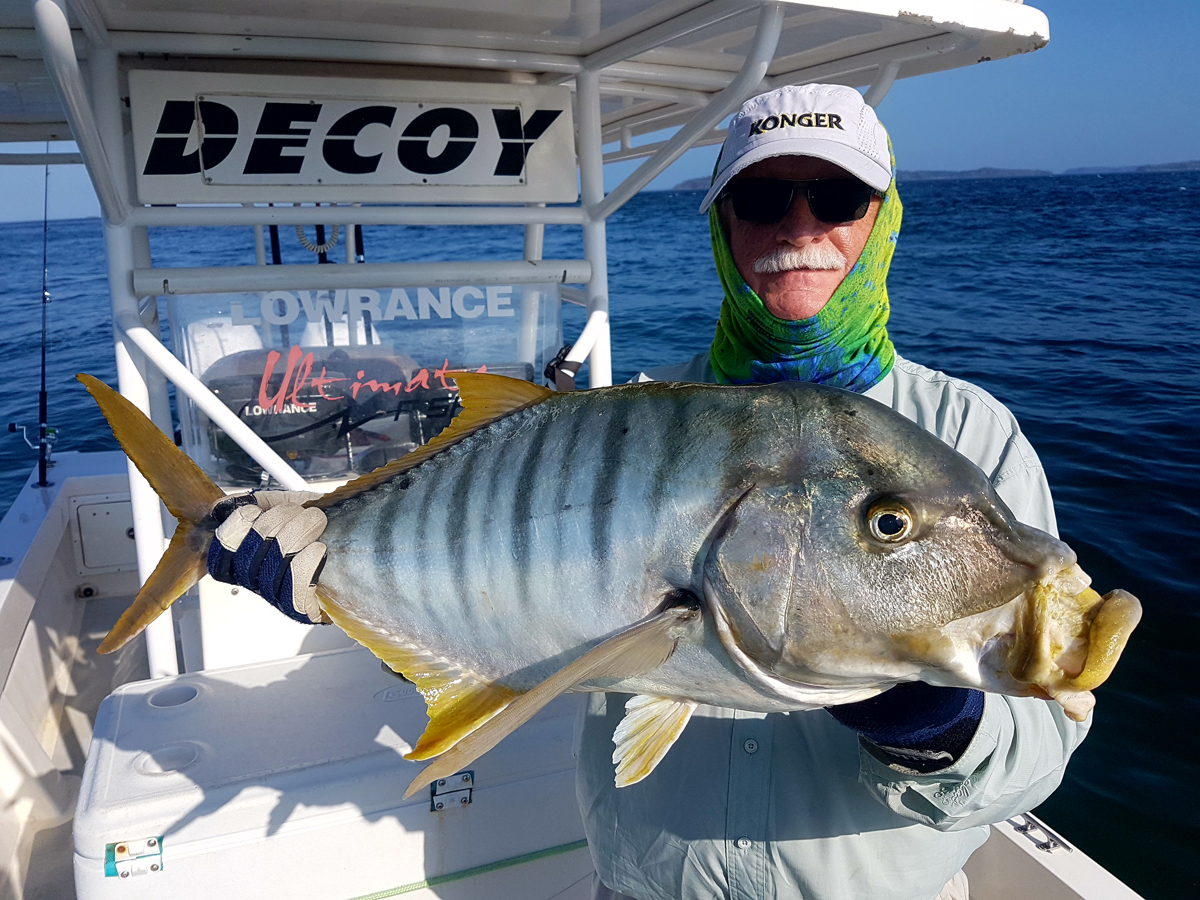 Species such as Lutjans are very often affluent in the seas of the archipelago. The particular queen cubéra Red can reach 30kg which will challenge your popper with its sharp teeth and may even put your arms to the test.
As you see above here is a beautiful Mullet Snapper an incredible fighter that is part of the Luthans’s family. 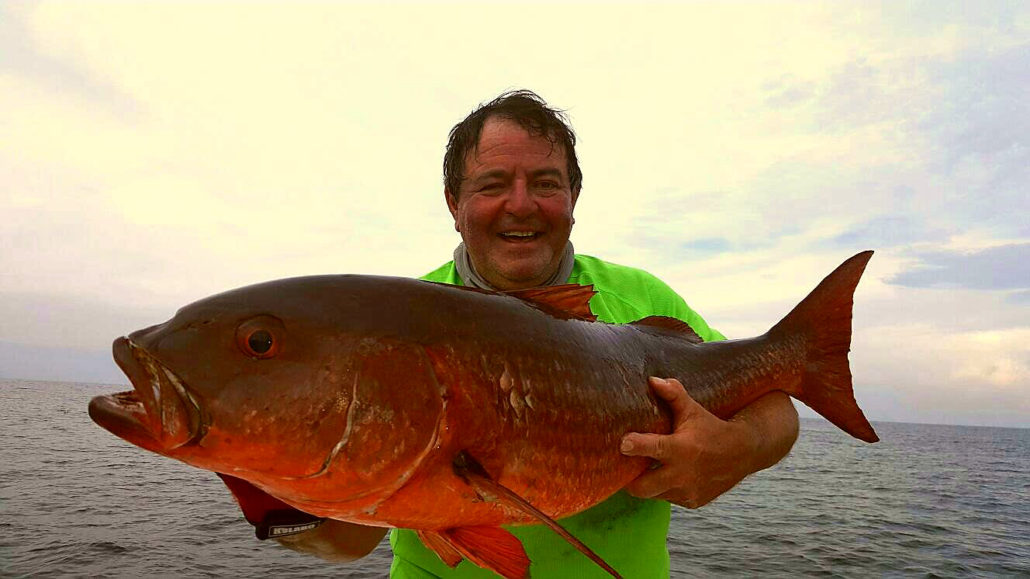 In my opinion, the Rooster fish named here Pez Gallo is most probably the most sportive fish of central America. Through its beauty and the vivacity of the fight when it comes to fish it makes the experience extraordinary. The biggest ones can weight up to 40kg and their jumps are spectacular. An important thing not to be overlooked when it comes to fish a rooster is to release it straight after the fight. This particular species is very sensitive and can’t survive for a long time out of its natural element: water. 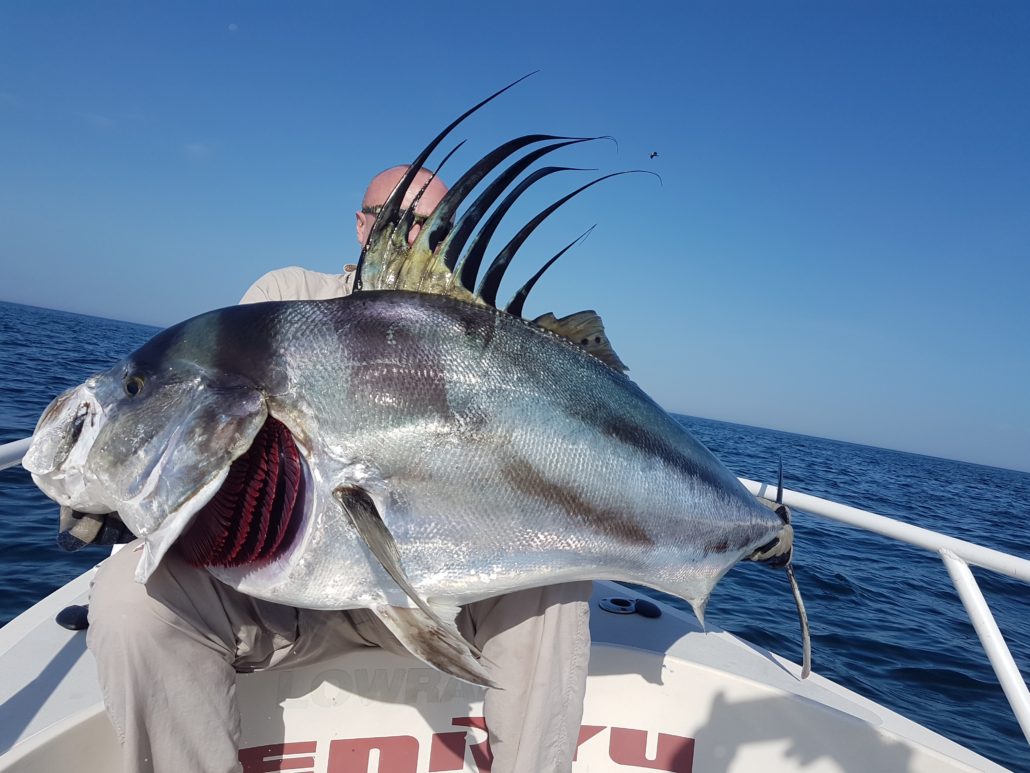 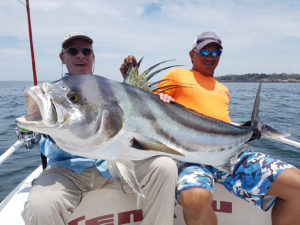 Dolphinfish doras are very often present on site of the archipelago especially during the period from June to January. This fish ‘species is pretty easy to find due to the number of birds that surround them because of the panic they cause. 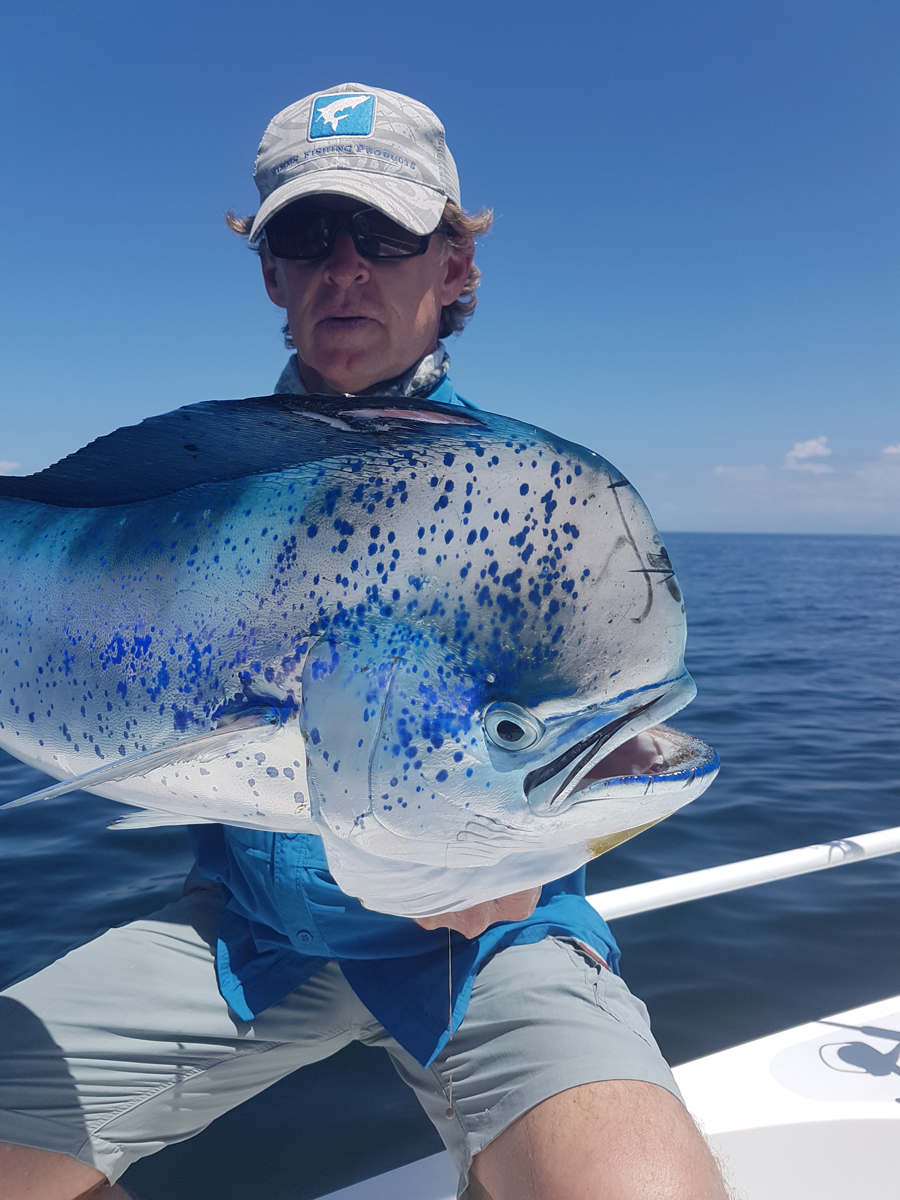 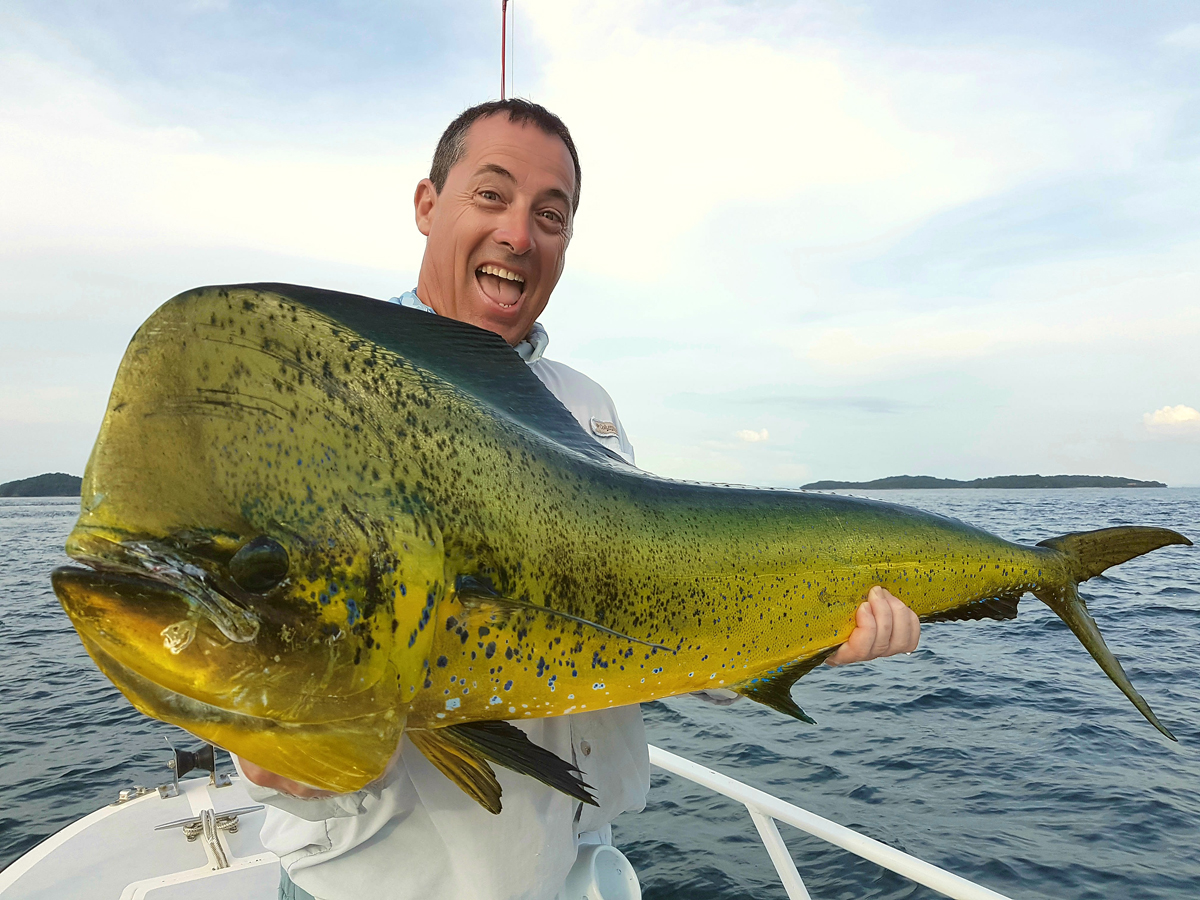 Yellow tunas are also massively present in the seas of the archipelago. Most of the time they are followed by dolphins and all together organize a feeding frenzy over sardines. This show is spectacular. If you are lucky enough, using the popper it is not uncommon to fish two to three tunas in the same fishing. 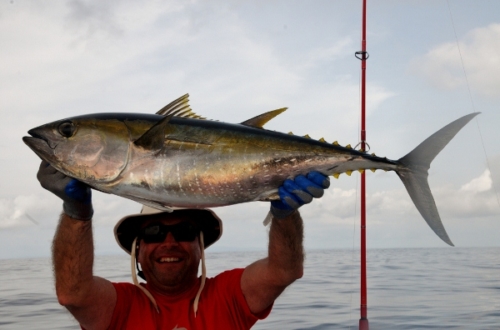 The serioles are everywhere in the archipelago. Depending the season of the year and the sea temperature, they are located to a greater or lesser depth from 8m to 60 m. Concurrently, we need to adopt our method of fishing from popper to jigg. This type of fish is a real fighter and its rushes are more than impressive. Your reels will be put to the test in this serious fishery. 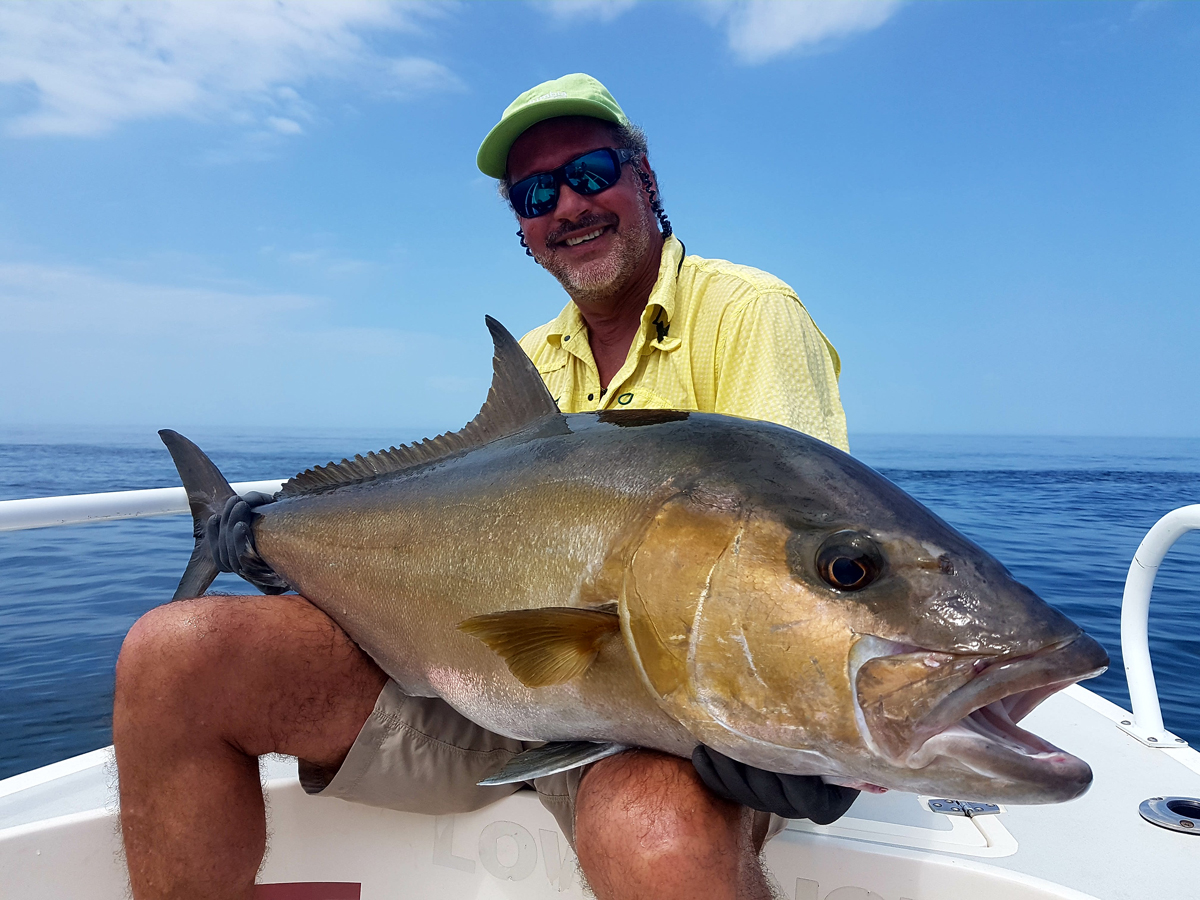 Around the archipelago you may also find many different species of grouper: the grouper brun, the common one, the broomtail and the Goliath. 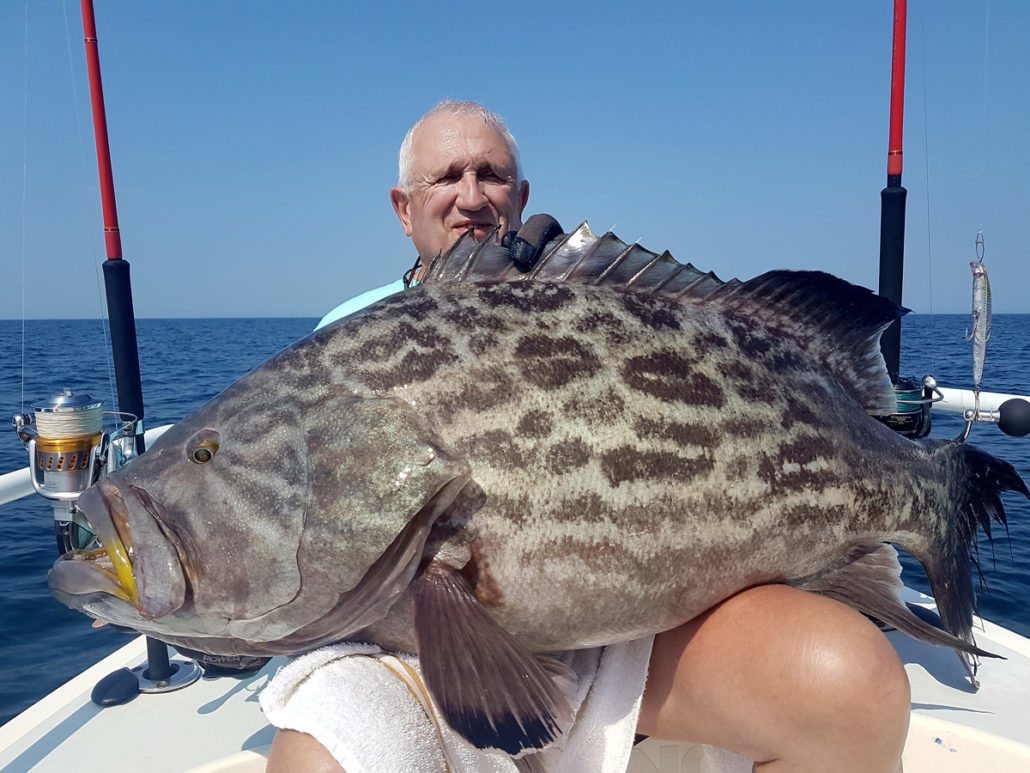 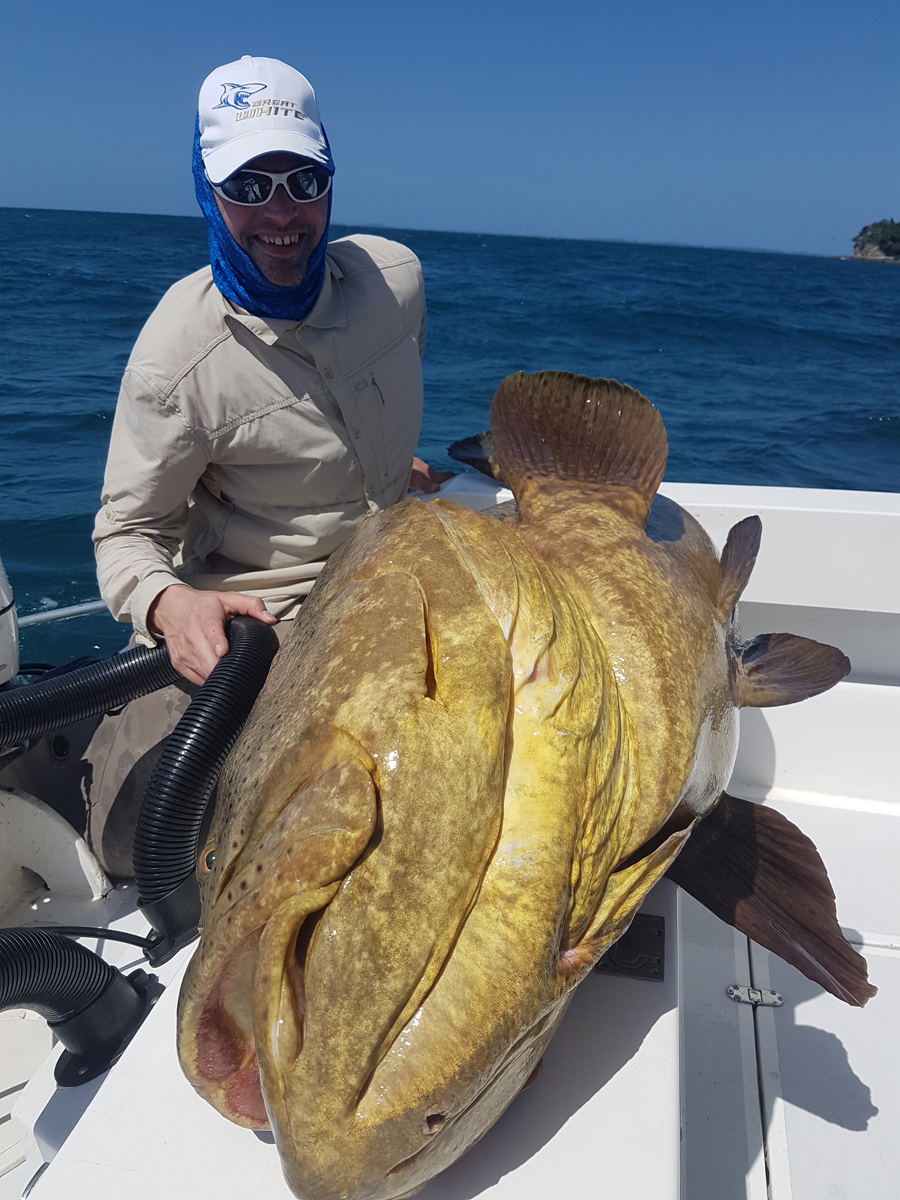 The Pelagic fishes are the following: the Black Marlin, the Sailfish and the Wahoo whose queen fishing technique is trolling.

The techniques used:
The most common technique implies fishing with surface lures (popper and big stick bait). The fishes present in the archipelago are not very educated thus react very well to the incentives of these lures. Only their handling can vary according to the position of the lure and the species sought.

Experiences like seeing the majestic ridge of a big rooster before the attack guarantees you an outstanding adrenaline rush.
Swimming fishes also give good results.

From a depth of 30 m of depth, the jigg is frighteningly effective and terribly sporty. Vertical techniques are particularly effective for groupers and amberjacks. About the jigg casting it is more efficient for all tuna and jacks in the hunt.